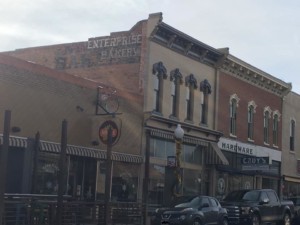 Located at 135 F St., in the heart of downtown Salida, CO, people can see the “ghost sign” of a historic bakery. Along the red brick wall of the building, a classic western font in all capital letters reads: ENTERPRISE BAKERY. The origins of this bakery date back to the late 1880s. On December 7, 1887, F Street was lined with lighting for the first time after a coal-fired steam electrical generating plant, a 75-foot smokestack, and a boiler room were installed; making Salida one of the earliest established Edison Electric Light systems.  Powered by lighting, F Street promptly attracted enterprises. From 1888 to 1890 alone, 24 buildings were built in downtown Salida. Building project were underway just two years prior, but a fire in 1886 prompted this renewed effort to construct a downtown. Frank W. Gill was among the builders in 1888, who built the two-story brick building with fluted columns and a bracketed cornice. On the first level there are large display windows, and on the second level, arched windows with hood molds. These building features of Italianate style remain seen to this day.

Frank Gill also launched a business in his buildings, called “Enterprise Bakery.” According to a newspaper article in 1889, Enterprise Bakery supplied the community with baked goods, but also staple and artisanal groceries, confectionary and other baking supplies, as well as tobacco and cigars. Gill rose early in the morning, beginning work around 3am to am, preparing dough for the day’s freshly baked batches. Mr. Gill and his assistant were often seen with their feet covered in flour. A print ad lists bread, pies, cakes among the goods baked. This business was also operated by Frank Gill’s brother, Frederick Gill, who had emigrated from Germany, seeking to live in a greater democracy.

The details from Gill’s operation today are sparsely identified. It is known that in his lifetime, Frank Gill sold his bakery to West & Gill. In the recent years, this workplace was operated as a book store called, “Brookhaven” and mid-year of 2019, was purchased by Tom Smith to continue the real estate company of Wes Hill & Associates. Currently, the newly renovated glass office you see in between Amicas Pizza and Salida Pharmacy & Fountain is the home of Colorado Summit Realty.

Want to retire in Salida?  A recent study by Smart-Asset listed Salida in the top three places to...

Mumford & Sons will be headlining the Salida music festival on August 21 and 22. Tickets for...